After waiting seemingly forever, the Fed finally raised short-term interest rates last week by 25 basis points, or a quarter of a percentage point. This made the modal range 0.25%-0.50%, versus 0%-0.25% previously.

The Fed pointed to strength in housing, business fixed investment and the improving job market.

They also said that even though the rate increase wasn’t a ‘one and done” move, new increases would come very slowly.

The Fed also voted to raise the seldom-used discount rate, which is charged on loans directly from the Fed to banks, by 25 points to 1%.

Fed chairwoman Janet Yellen pointed out that a rising dollar and weak foreign economic growth were hurting exports and sectors like energy. She claimed those negative forces were being “offset by solid expansion of domestic spending” going even further she claimed the economic outlook overseas wasn’t as bleak as earlier in the year and the strong dollar was “transitory” (whatever that means).

The Markets reacted dramatically, as they often do. Stocks first sank, then soared, then sank, then surged 224 points on the Dow Industrials. The Treasury yield curve flattened even more, with the two-year yield and five-year yields rising about four basis points, but the 10-year yield rising half as much and the 30-year yield gaining just one point.

Gold and silver finished higher on the day, with the yellow metal up about $10 an ounce. The dollar was roughly flat.

What does it all mean?

For the Fed it means the end of easy money and the start of fiscal tightening.

For banks it means every man for himself since central bankers around the world are going in different directions.

For individual investors it means increased volatility and even more uncertainty.

My advice is to keep lots of cash on hand and be very picky when buying stocks. Avoid anything that doesn’t pay a solid dividend and a dominate position in its sector.

Avoid Junk Bonds (obviously) and any bond with a maturity date past two years. A good place to look for parking money would be Floating Rate Funds (FFRHX is a good example). 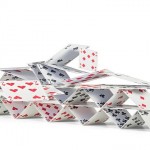 Our Global Economy is Essentially a “House of Cards”

For years now we have seen much published conjecture regarding the Fed and when it will raise rates....