A Disconnect Between Our Economy, Corporate Earnings, the Stock Market? It is hard to remember another time when there were so many different opinions regarding the future direction of the stock market.  The “bulls” often support their argument by pointing to corporate earnings strength and falling unemployment while the “bears” commonly cite the slow pace of economic growth and a stock market that is at, or near, all-time highs. The first chart compares US Total Market Capitalization to Gross Domestic Product (TMC/GDP) and will increase when stock prices increase at a faster rate than the economic output of our economy.  The ratio has grown dramatically since 2009 and is fast approaching levels not seen since the dot-com bust of 2000.

The second graph is a cyclically adjusted price-to-earnings ratio of the S&P 500 index (also known as the CAPE or Shiller P/E) which smooth’s earnings figures by averaging the past 10 years of corporate earnings data.  It is a measure of stock prices relative to corporate earnings (reported on per share basis).  This too, has risen quickly and is close to levels last achieved in the run up to the financial crisis of 2008/9.

Charting the two ratios together: Noticing the difference in trajectory between the TMC/GDP and the Shiller P/E over the past few years, we contend that current stock prices are more overvalued in light of overall economic activity than in relation to corporate earnings.

There are a number of possible contributing factors to this hypothesis:

Going forward we believe that if economic activity doesn’t increase significantly and justify current stock prices, then it is reasonable to assume a stock market correction will ensue to bring valuations back in-line with historical averages.

The wild card and immediate threat to the prospects for faster growth are interest rates.  If interest rates soon begin to rise, that could stymie overall economic activity and increasingly hurt corporations because their opportunity for incremental earnings improvements (that they have enjoyed for the past 5 years) through debt refinancing will evaporate.  Whatever comes to pass these are interesting and historic times for our economy and stock market.

Other posts from Kenyon Lederer 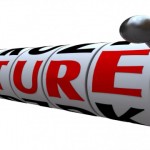 Where is the Risk?

This past year has left many investors scratching their heads and thinking, “Why all the focus on risk...